Questions? Write Me at

How to Make & Use a Potato Tower 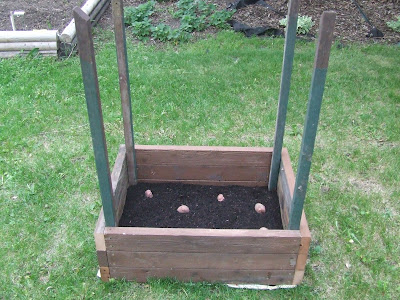 Early this spring, Sara, a fellow gardener and reader, left a note on The Full Circle Gardener Facebook page, asking what I knew about growing potatoes in a barrel.  I had honestly never looked into the idea, but in the process of looking for information for her I became intrigued!  A month or so later I started seeing a variety potato tower ideas on Pinterest.  The idea of getting an abundance of potatoes (as much as 100lb according to some sources) in a small area had me hooked and with the pile of salvaged redwood decking we'd used to make our new strawberry bed still laying around, I decided to see what we could do about making a potato tower.

I found four deck railing spindles for the up rights and several pieces of 2x4 decking that my husband cut into 2ft and 2.5ft lengths.  We screwed the bottom 3 layers onto the uprights, set the structure in our chosen location, and covered the grass with newspaper to keep it from growing up into the tower.  I then added compost for the planting medium and placed eight sections (should have 2-3 eyes per section) of seed potatoes in the soil, covered them and watered.  (You can plant four seed potatoes per square foot according to the square foot gardening method.)  The extra boards we cut for the sides were set aside to be added later as needed. 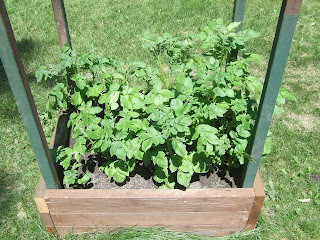 It has been about a month since I planted the potatoes and most of the plants are about 12 inches tall. Last week I decided it was time and added the first layer of additional soil.  When adding additional soil be sure to cover only 1/3 of the plant at a time so that it maintains enough leaf area to feed the potato tubers you are wanting to produce below ground.  The portions of the stem that become buried will root and potentially produce more potatoes.  Continue to add side boards and soil all summer.  Fresh 'new potatoes' should be ready for harvest about 10 weeks after planting.  For more information on the final harvest see my Plant of the Week post on potatoes.

Here's to trying a new gardening method this summer. :)  Have you grown potatoes in a bucket or tower before?  I'd love to hear about your experience.

I would love to hear your gardening comments and/or questions.

The Full Circle Gardener
North Dakota, United States
Welcome to The Full Circle Gardener! I'm Stacy and I LOVE gardening and plants. I have a BS in Botany & an MS in Ecology, but most importantly I grew up helping my parents garden & started gardening for my own family in 2005. Join me in my adventures as a "full circle" gardener... starting seedlings, planting, tending, harvesting, composting, processing & of course eating the wonderful fruit of my labors!

Get Posts By E-mail: