Questions? Write Me at

About three weeks ago I harvested the last of the tomatoes in my garden.  Most of them were not yet fully ripe so I brought them into my basement to ripen.  All but about one dozen cherry and another dozen full size tomatoes have fully ripened over the last three weeks. (Yeah! :D) 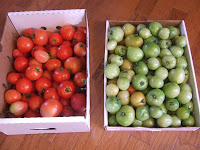 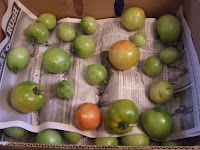 Tomatoes from my final fall harvest three weeks ago. (above: then, below: today) 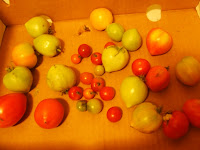 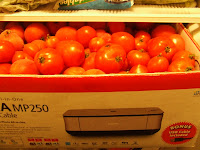 I wanted to be able to process all of the tomatoes at one time so I cleared a shelf in my upright freezer and have been collecting them there as they have ripened (photo above left- mine plus a few pounds I was given by a friend).  I now have an entire shelf of whole, as they would be right out of the garden tomatoes in my freezer.

This summer I discovered freezing the tomatoes like this works great for tomatoes that are intended to be cooked or processed.  Out of despiration, I popped a couple dozen tomatoes that were on the verge of spoiling into the freezer before we left on a trip.  I pulled them out later this fall to make into spaghetti sauce and found that as I washed them the skin peeled right off!  I was ecstatic!  It took a lot less effort and energy, and was a lot less mess than blanching them to get the skins off!  I did have to let them defrost some before I could cut out the stem, but but it didn't take long before I could carve them out.

You do need to know that veggies, like tomatoes, with a high water content will loose their crispness and become soft and mushy when they are defrosted, but if they are intended to process into a sauce that isn't a problem. I look forward to turning my tomatoes into sauces later this winter when the harvest and holiday season are over...

I would love to hear your gardening comments and/or questions.

The Full Circle Gardener
North Dakota, United States
Welcome to The Full Circle Gardener! I'm Stacy and I LOVE gardening and plants. I have a BS in Botany & an MS in Ecology, but most importantly I grew up helping my parents garden & started gardening for my own family in 2005. Join me in my adventures as a "full circle" gardener... starting seedlings, planting, tending, harvesting, composting, processing & of course eating the wonderful fruit of my labors!

Get Posts By E-mail: